Did you know? We, humans, have five basic senses: touch (skin), sight (eyes), hearing (ears), smell (nose), and taste (tongue). These five senses are our link to the world around us.

Each of our five senses has its own detection system to get information from our surroundings. The information is then sent to the brain. In the brain, the information will be processed and combined to create a complete sensory picture of our environment. Let’s take an example.

Sight — The cells in the retina at the back of the eye detect light and color.

Sound — The hair cells in the ear move in response to specific sound frequencies.

Taste — The taste buds on the tongue react to the salty, sour, bitter, sweet, and umami tastes in our food.

Smell — The special cells in the nose detect various chemical particles in the air that we breathe in. We also detect the flavors in food as air moves from our mouth to the back of our nasal cavity.

Touch — The various receptors in our skin detect different types of touch, including pressure and vibrations.

Those are how our five main senses generally work. Nonetheless, in reality, we can sense a lot more than this from our environment. For example, we can sense how hot or cold something is, feel pain, and tell how our body is positioned.

Each of these senses has its own detection system that must send signals to the right part of the brain. For example, the sense of balance comes from the vestibular organs in the inner ear, which can tell when our body is tilted in different directions. We might not be as aware of these other senses as we are of the main five senses, but they still have a significant impact on us.

The Importance of the Five Senses

Our five senses have an important role and a significant impact on us, such as:

According to the Stanford Encyclopedia of Philosophy, touch is believed to be the first sense that we, humans, develop. Touch comprises several different sensations which are transmitted to the brain through special neurons in the skin. Temperature, light touch, pressure, vibration, pain, and other sensations are all part of the sense of touch and are associated with different receptors in the skin.

Touch can also affect the way we make decisions. Based on six studies by psychologists at Harvard University and Yale University, published in the June 24, 2010 issue of the journal Science, texture can be associated with abstract concepts, and touching something with a texture can influence the decisions a person makes.

Sight, or the perception of something through the eyes, is a complex process. It starts with light reflecting off an object into the eye. The cornea, the transparent outer layer of the eye, bends light that passes through the pupil. The iris, the colored part of the eye, works like a camera shutter, retracting to shut out light or opening wider to let in more light.

The lens of the eye then bends the light and focuses it on the retina, which is full of nerve cells. The cells in the retina are shaped like rods and cones and are named after their shape, according to the American Optometric Association.

Cones in the inner area of ​​the eye translate light into colors, central vision, and details. Meanwhile, rods translate light into peripheral vision and motion. The rods also serve to provide a clearer vision when light is limited, such as at night. The information translated from the light is sent as electrical impulses to the brain through the optic nerve.

Hearing works through the complex labyrinth that exists in the human ear. Sound is transmitted from the external ear to the external auditory canal. Sound waves then reach the tympanic membrane or eardrum, which is a thin sheet of connective tissue that vibrates when sound waves hit it.

The vibrations travel into the middle ear where the auditory ossicles—three very small bones called the malleus (hammer), incus (anvil), and stapes (stirrup)—vibrate.

The stapes bone then pushes a structure called the oval window in and out, sending vibrations to the organ of Corti, a spiral-shaped organ that is the receptor organ for hearing. Tiny hair-shaped cells in the organ of Corti translate the vibrations into electrical impulses which then travel to the brain via sensory nerves.

We can keep our sense of balance because of the Eustachian tube, or pharyngotympanic tube, in the middle ear. The Eustachian tube equalizes the air pressure in the middle ear with the air pressure in the atmosphere. The vestibular complex, in the inner ear, is also important because it has receptors that regulate a sense of balance. The inner ear is connected to the vestibulocochlear nerve, which carries sound and balance information to the brain. 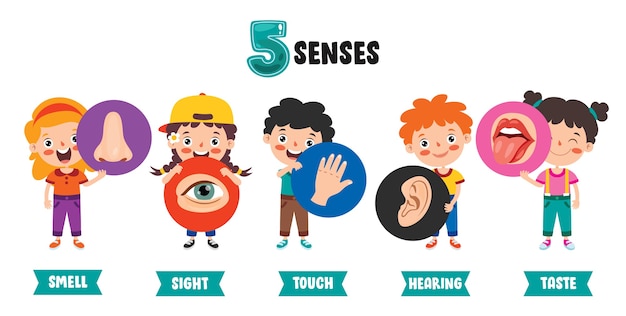 Some animals, like dogs, are known to have a great sense of smell. However, research shows that humans are just as good as them. A report published in the May 11, 2017 issue of the journal Science explains that humans can distinguish 1 trillion different odors (before, it was believed that humans could only inhale 10,000 different odors).

We, humans, have 400 smelling receptors. Although this isn’t as many as animals with super smelling sense like dogs have, the much more complicated human brain makes up for the difference.

In fact, poor smelling ability in humans may be a symptom of a medical condition or aging. For example, a distorted (decreased) sense of smell is a symptom of depression and schizophrenia.

Old age is also a factor that can reduce the ability to smell. According to a 2006 paper published by the National Institutes of Health, more than 75% of people over the age of 80 may have a major olfactory disorder.

Our sense of taste is typically broken down into the perception of four different tastes: salty, sweet, sour, and bitter. However, a more recent fifth taste has also been added, defined as umami or savory, leading us to think that there might be many other flavors that have not yet been discovered. Spicy is not a taste. According to the National Library of Medicine (NLM), it’s actually a pain signal.

The sense of taste helped human evolution. It helped humans interpret and digest the food they ate. A bitter or sour taste indicates that the food or plant might be poisonous, stale, or rotten and, therefore, can’t be consumed. Something salty or sweet, on the other hand, usually meant that the food was rich in nutrients.

We have 2,000 to 4,000 taste buds. Most of them are located on the tongue, but some line the back of the throat, the epiglottis, the nasal cavity, and the esophagus. The sensory cells on the taste buds form capsules that are shaped like flower buds and have a texture like an orange. The tips of these capsules have pores that work like funnels with tiny taste hairs. Proteins on the hairs bind chemicals to the cells for tasting.

People used to believe that the tongue has specific areas or zones for each taste. However, it turned out to be a myth. In fact, the five tastes can be sensed on all parts of the tongue, although the sides are more sensitive than the middle. Around half of the sensory cells in taste buds react to several of the five basic tastes.

The cells have different levels of sensitivity. Each cell has a taste palette with a specific taste rank. Some cells may be more sensitive to sweet, followed by bitter, sour, and salty, while others have their own taste ranks. We can get the full experience of a taste after all the information from the various parts of our tongue is combined and translated by our brain.

There are other factors that help build the taste perception in the brain. For example, the smell of food or drink greatly affects the way the brain perceives its taste. The process where smells are sent to the mouth is called the olfactory referral. This is the reason why when we experience a stuffy nose, we usually have trouble tasting food properly. In addition, texture, which is translated by the sense of touch, also contributes to taste.

This is the end of our discussion on the five senses, their functions, and how they work. Do you want to learn more interesting topics on Science and Technology? Join Sampoerna Academy, the school with an effective, high-quality international curriculum. For more information, get in touch with us here!