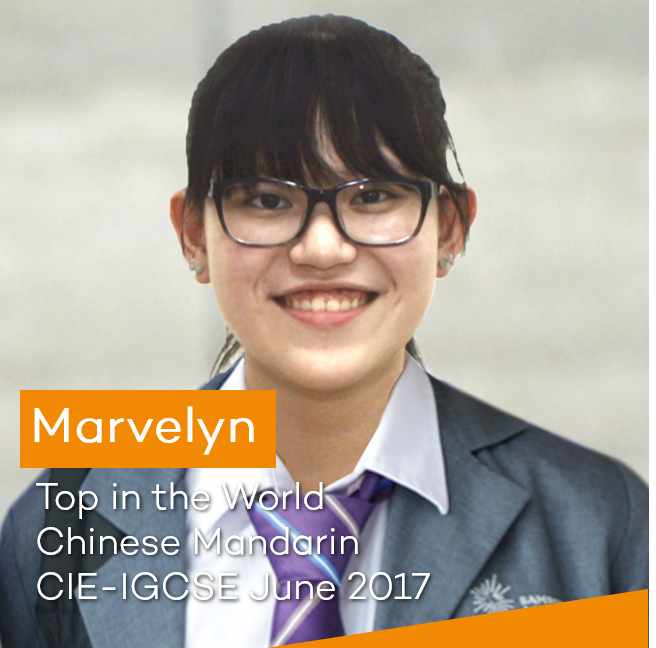 Marvelyn Andersen from Sampoerna Academy Medan campus is honored with an Outstanding Cambridge Learner Awards 2017 with Top of World in Cambridge IGCSE for Chinese Mandarin.

Chinese Mandarin is the new English

The popularity of Mandarin as an international language has developed within the last decade following the booming economic growth of China. As the second largest economy of the world and with one of the highest rates of growth, China is a major world player that will only continue to be more significant and full of opportunities.

There is a great demand for people who can bridge the gap between this new growing China and the wider world. Sampoerna Academy realizes that communication proficiency will be increasingly crucial, which is why the ability to learn the language is a necessary skill that needs to be taught in class. We believe giving the young minds opportunity far ahead to learn the language of the future will help them seal tomorrow’s global competition.

In an increasingly globalized world, intercultural competence is essential and we find it important to awaken children’s interests in other cultures at a time when they are open and receptive. We introduce foreign languages in our classes with the belief “the younger the better”, the idea that young learners are able to grasp new concept at extraordinary paces and will therefore become more proficient more quickly.

This is proven by the impressive achievements of Sampoerna Academy Medan students who recently demonstrated exceptional performance in Cambridge International General Certificate of Secondary Education (IGCSE).

keyboard_arrow_up
We use cookies on our website to give you the most relevant experience by remembering your preferences and repeat visits.
By clicking “Accept”, you consent to the use of ALL the cookies.
Cookie settingsACCEPT
Manage consent

This website uses cookies to improve your experience while you navigate through the website. Out of these, the cookies that are categorized as necessary are stored on your browser as they are essential for the working of basic functionalities of the website. We also use third-party cookies that help us analyze and understand how you use this website. These cookies will be stored in your browser only with your consent. You also have the option to opt-out of these cookies. But opting out of some of these cookies may affect your browsing experience.
Necessary Always Enabled
Necessary cookies are absolutely essential for the website to function properly. This category only includes cookies that ensures basic functionalities and security features of the website. These cookies do not store any personal information.
Non-necessary
Any cookies that may not be particularly necessary for the website to function and is used specifically to collect user personal data via analytics, ads, other embedded contents are termed as non-necessary cookies. It is mandatory to procure user consent prior to running these cookies on your website.
SAVE & ACCEPT
X