Did you know that almost everything around us can be considered a 3D shape? In this article, we’ll learn about what three-dimensional (3D) shapes are, the different types of 3D shapes, and various formulas for finding the volume of those shapes.

3D shapes are a category of geometric shapes. In geometry, 3D shapes can be defined as solid figures or objects that have three dimensions—length, width, and height, unlike 2D shapes which only have a length and a width. 3D shapes have faces, edges, and vertices. They also have depth, so they occupy some volume.

The Types of 3D Shapes 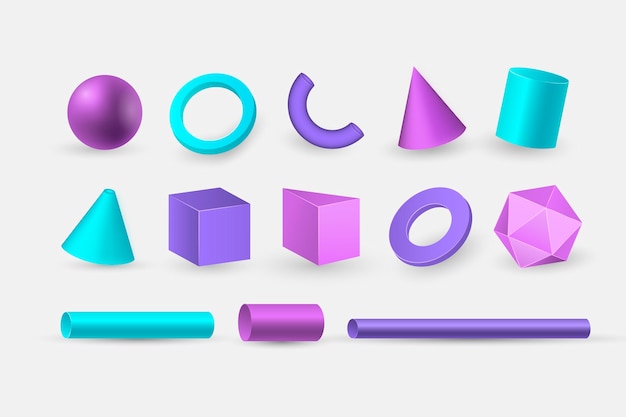 Let’s take a closer look at each of the 3D shapes mentioned above.

Did you know that the cone you eat with your ice cream is a 3D shape? YES! Ice cream cones have a conical shape. A cone is a 3D shape that has a circular flat base and a curved surface. The curved surface is a sector of a circle.

A sphere is a 3D shape that consists of only a curved face. Because of its shape, a sphere has no edge and vertices. However, since it has a curved surface, it has a volume. One example of a sphere is the balls we use in sports, such as a soccer ball or a basketball.

A cylinder is a 3D shape that has two circular flat faces of the same size and one curved face. Some examples of cylinders are soda cans, milk cans, and a snare drum. A cylinder and a cone have something in common: both have circular flat bases. However, a cylinder has two while a cone has one. Moreover, a cylinder’s curved surface is a rectangle while a cone’s curved surface is a part of a circle.

A cube is a 3D shape that has six flat faces of the same size, twelve edges of equal length, and eight vertices. A cube’s flat faces are all square-shaped. Two examples of cubes are dice and Rubik’s cubes.

A prism is a 3D shape that has two flat faces, as a base and a top, which have the same shape and size, and congruent rectangular surfaces. Some examples of everyday items in the shape of a prism include house roofs and camping tents.

So, we’re done with our geometric 3D shapes A-Z. Want to learn more elementary-level mathematics through an international curriculum and a STEAM-based approach? Join Sampoerna Academy! For more information, get in touch with us here [link].