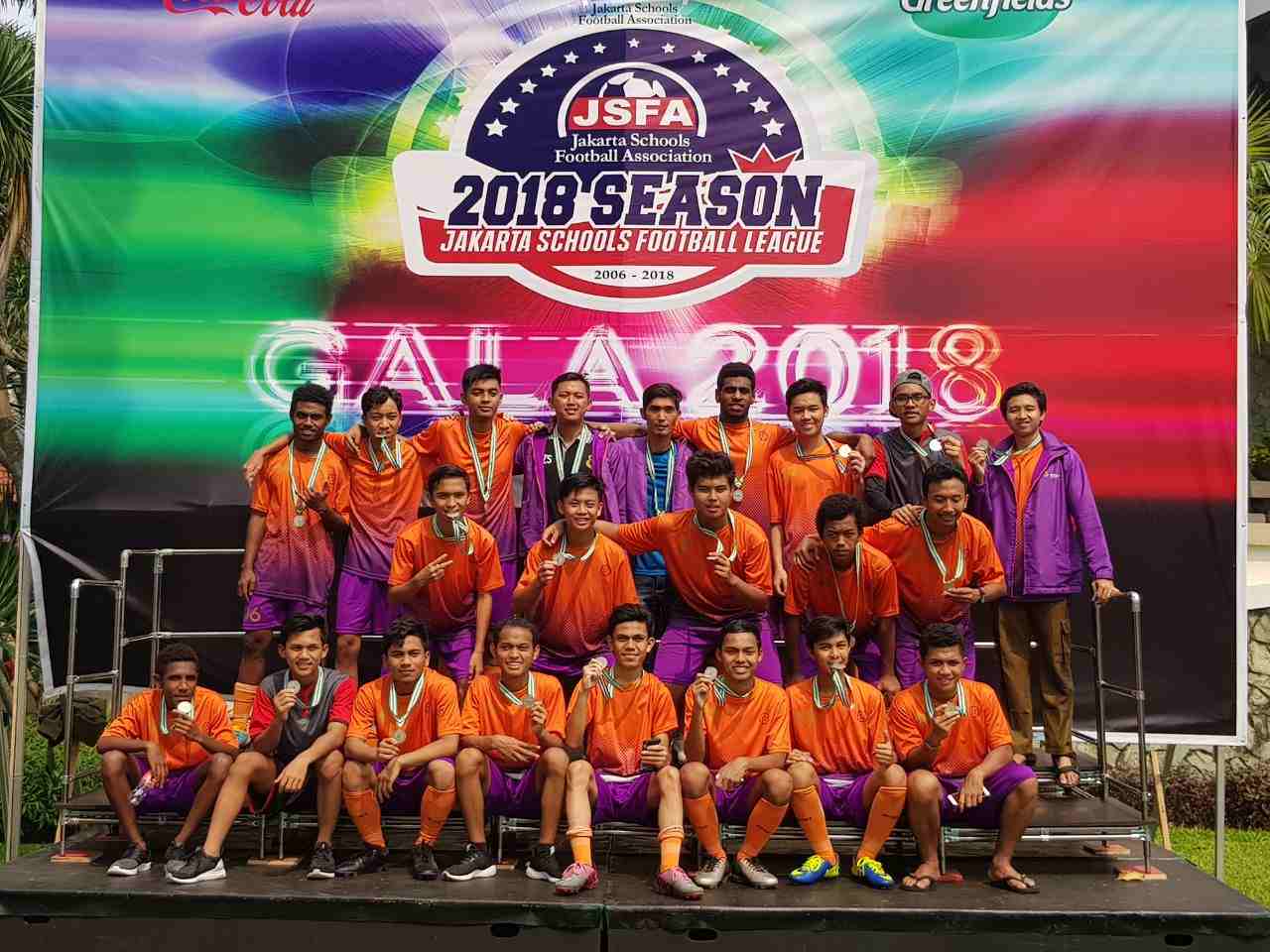 The Jakarta Schools Football Association (JSFA) 2018 Season, which began in January, came to a climax with the final of the Greenfield Cup on Sunday, 5 May. After defeating Deutsche Schule Jakarta, four to two, in the semi-final, Sampoerna Academy U19 team was one match away from winning the cup. Unfortunately, the final pitted us against Dragons FC from Jakarta International School (JIS) and ended with the score of nil-five in our defeat.

This is a case of history repeating itself. Last month, our team played against Dragons in the Jakarta Schools Football League (JSFL) and lost, one to two. At the end of the league, both teams had seven wins. But our single loss compared to their single draw means we had to be content with second place. Our team’s full record in JSFL 2018 may be accessed here.

Despite our team’s effort to return the favor in the final, Dragons FC proved themselves to be the better team and a great rival. We would like to offer our congratulations to JIS for winning both the JSF League and Greenfield Cup!

We also applaud our team for doing extremely well this season. Winning a total of nine matches out of eleven in JSFL and Greenfield Cup, and becoming the runner-up in both is certainly an amazing feat for a newly established team in their very first tournament!

Our Academy’s U19 soccer team was established on 7 August 2017. Currently, the regular members consist of sixteen students from Grade 11 and two from Grade 12. They train for two hours after school, twice a week at Aldiron Soccer Field. During the League, they also train on Wednesdays. Our soccer team is coached by Mr. Azis and managed by Mr. Slamet. For the next season of JSFA, we aim to win in more than one division.

The Prestige and Heart of JSFL

JSFL is arguably one of the largest school football competitions— not just in Jakarta but also in the world—with up to 200 teams from around 60 schools. Every season, more than 1,000 matches are played at twelve different venues on weekends between January and April. In addition to the League, there is also a Challenge Cup ‘knock-out’ competition for all age groups, which usually runs from February through to May.

Respect, sportsmanship and fair play are at the heart of the competition. Our students experience the joy of winning and the confidence it brings, as well as the disappointment of defeat, and develop the ability to move forward to the next challenge in a positive way

keyboard_arrow_up
We use cookies on our website to give you the most relevant experience by remembering your preferences and repeat visits.
By clicking “Accept”, you consent to the use of ALL the cookies.
Cookie settingsACCEPT
Manage consent

This website uses cookies to improve your experience while you navigate through the website. Out of these, the cookies that are categorized as necessary are stored on your browser as they are essential for the working of basic functionalities of the website. We also use third-party cookies that help us analyze and understand how you use this website. These cookies will be stored in your browser only with your consent. You also have the option to opt-out of these cookies. But opting out of some of these cookies may affect your browsing experience.
Necessary Always Enabled
Necessary cookies are absolutely essential for the website to function properly. This category only includes cookies that ensures basic functionalities and security features of the website. These cookies do not store any personal information.
Non-necessary
Any cookies that may not be particularly necessary for the website to function and is used specifically to collect user personal data via analytics, ads, other embedded contents are termed as non-necessary cookies. It is mandatory to procure user consent prior to running these cookies on your website.
SAVE & ACCEPT
X