Sampoerna Academy > Getting to Know the Planets in the Solar System 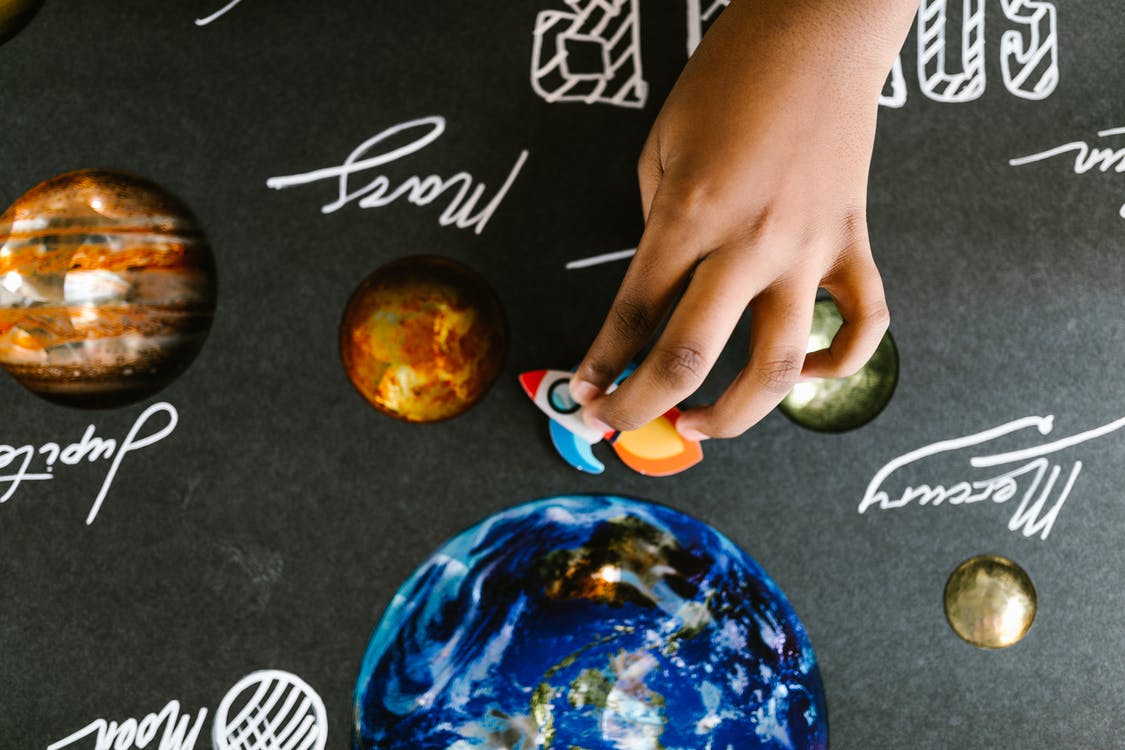 The Solar System is the system of the space we live in. It consists of planets, stars, and other objects such as meteors, comets, and dust.

What is the Solar System?

The Solar System is what we call the specific arrangement where the objects in the space we live in move around the Sun as the center. The word solar in the name comes from the Latin root solaris meaning “of the sun”—while the word sol in Latin means “the sun”—which clearly has to do with the Sun as the main star at the center of the system and other objects orbiting it. Our Solar System also revolves around its orbit in the Milky Way galaxy at a speed of ± 515.000 mph. This means it takes 230 million years for our Solar System to complete one full orbit in the galaxy.

In our Solar System, there are various objects including meteors, asteroids, comets, and other stars. There are also objects called planets. A planet is a celestial body that neither produces light nor heat. Planets continuously move around the Sun.

The Planets in the Solar System and Their Characteristics

Mercury is the first planet in the Solar System and is located closest to the Sun. Because it’s very close to the Sun, it’s not easy for scientists to observe Mercury. Mercury is also the smallest planet in the Solar System. Mercury’s revolution period is 88 days—faster than other planets. However, it rotates on its axis very slowly. One rotation takes 58,6 days, or exactly two-thirds of its revolution period, to complete.

Mercury is a small rocky planet. It is only about as wide as the Atlantic Ocean and is 18 times smaller than the Earth. Mercury is very similar to the Moon—its surface is covered with craters. It has no atmosphere and no water. The daytime temperatures at its equator can rise to 450 °C, but the nights on Mercury are very cold, well below -180 °C.

Venus is the second closest planet to the Sun. It is the hottest planet in the Solar System. Venus is the brightest object we can see at night other than the Moon, and it usually appears as a morning or evening “star” that shines beautifully in our sky. In a telescope, we can see Venus through phases, just like the Moon.

Venus is so bright because it is covered by clouds that reflect sunlight. The yellowish clouds are made of sulfur and sulfuric acid. In certain ways, Venus is like the Earth’s twin. Both are about the same size and made of the same rocky materials. However, Venus is shrouded in a thick atmosphere of carbon dioxide—the gas we exhale. The atmosphere is so dense that walking through would be like wading through water.

The carbon dioxide in Venus’ atmosphere traps most of the heat from the Sun, and the cloud layer also acts as a blanket. The result is an “uncontrolled greenhouse effect” that causes the planet’s temperature to rise to 465°C—hot enough to melt lead. This means Venus is even hotter than Mercury.

People say that everyone on the Earth is a traveler through space. First, the Earth orbits the Sun at a speed of 30 km/s, which is 45 times faster than an airplane. It takes 365 days, or one year, for the Earth to complete one orbit around the Sun.

The Earth also spins very quickly, like a top leaning to one side. People living at the equator travel from west to east at a speed of 1.670 km/hour. However, the speed is slower for people living near the poles. Because everything around us moves in the same way, we’re usually not aware of our high-speed travel. The easiest way to find out is to observe the Sun, Moon, and stars as they appear to move across the sky.

Mars is often called the “Red Planet” because it appears in the sky as an orange-red star. Because of this color, the ancient Greeks and Romans named the planet after their god of war. Today, we know that the red color on the planet is caused by the rust in the Martian rocks.

Mars is the fourth planet from the Sun. It orbits the Sun at an average distance of 228 million km—half the distance from the Earth, so humans will find it very cold. While the summers near the Mars equator can be very warm, the average temperature is 63 °C below zero—like winters in Antarctica. The nights are also very cold.

On Mars, humans will also face another problem. The air there is 100 times thinner than on the Earth and consists mostly of carbon dioxide. Human explorers will have to wear oxygen masks and special suits whenever they leave their tightly sealed homes. So, the question is, do you still want to try living on Mars?

Jupiter is five times as far from the Sun as the Earth, so its surface temperature is low, around –145 °C. Every 13 months or so it comes closer to our planet and appears very bright in the night sky.

Jupiter is a giant ball of gas with no solid surface. The planet is mainly made of two very light gases:

hydrogen and helium. That’s why, through a telescope, Jupiter appears as a cloudy atmosphere with colorful bands and spots. The planet is also home to the largest storm called the Great Red Spot which is several times larger than the Earth. Today, this giant storm has been blowing non-stop for over 300 years.

Jupiter has a thin ring of dust that is more than 100.000 km wide and was first discovered by the Voyager spacecraft. What’s more, Jupiter is also orbited by the largest family of satellites—79 today according to NASA (53 named and another 26 awaiting official names).

Saturn is the sixth planet from the Sun. It is the second-largest planet in the Solar System and is mainly made of the light gases hydrogen and helium, like Jupiter. That’s why, although 764 Earths would fit inside the “gas giant”, Saturn only weighs 95 times as much as our planet. If we could put all the planets in a pool of water, Saturn would be the only one that floats. However, despite its size, Saturn rotates once in more than 10 hours. The spin is so fast that it bulges outward at the equator, making it look like a ball that has been squashed.

In a telescope, Saturn appears pale yellow. It doesn’t have a solid surface, so what we see are clouds that appear as light and dark bands. These clouds are blown along by very strong winds. Much of the heat that drives the winds comes from inside the planet. Meanwhile, above the cloud tops is a flat, disk-shaped system of rings.

Uranus is the seventh planet from the Sun. It was discovered by William Herschel in 1781. Uranus is located more than 2.800 million km from the Sun. At this distance, the temperature of its cloud tops is -214 °C. It moves quite slowly and has a long way to travel, so each orbit lasts 84 years.

As the third-largest planet in our Solar System, Uranus is a basically giant world. 64 Earths would fit inside it. However, despite its size, Uranus rotates rapidly, so a day on the planet lasts only 17 hours and 14 minutes.

Uranus spins like a top knocked over on its side. This means that the Sun is sometimes directly overhead at the poles. Each pole has a summer and a winter that lasts 21 years, making it the hottest and coldest place on the planet.

Neptune was discovered in 1846 by Johann Galle, an astronomer at the Berlin Observatory. The planet turned out to be an almost identical twin of Uranus. It’s 57 times bigger than the Earth but rotates quite rapidly that one day on the planet lasts only 16 hours 7 minutes.

Neptune lies about 4.500 million km from the Sun, and a year on the planets lasts nearly 165 Earth years. Like Uranus, it has an atmosphere of hydrogen, helium, and methane. The interior is made of ice, with a possibly rocky core. Although it has an extremely cold atmosphere of -220 °C, the blue planet also has very strong winds and violent storms. Voyager 2 imaged a huge spot the size of the Earth.

Today, Neptune has at least 14 known moons. The largest, by far, is Triton, an icy world larger than Pluto. Triton is so cold that its thin atmosphere has frozen on the surface. However, Triton has many active icy volcanoes that spurt clumps of gas and dust. Triton is also unusual because it travels “the wrong way”—from east to west—around Neptune.

Pluto was discovered in 1930 by Clyde Tombaugh—24 years old at that time—who was using a special machine to compare photos of the sky. It turned out to be a tiny world, even smaller than the Earth’s Moon.

Pluto rotates “backwards“—from east to west—once every 6 days 9 hours. Its largest moon, Charon, takes the same period to orbit Pluto. This means that anyone living on one side of Pluto would never see Charon. Today, Pluto has five moons.

For years, Pluto was accepted as the ninth planet from the Sun (even though it sometimes comes closer than Neptune). However, today, Pluto is considered a “dwarf planet” and is sometimes not

Want to learn more about the Solar System and other Science topics? Let’s study together at Sampoerna Academy! For further information, please contact here. Join us now!