Sampoerna Academy > Let’s Get to Know the Type of Clouds and Their Characteristics! Clouds are made up of water vapor which turns into liquid water droplets. A large number of these water droplets form on tiny particles, like dust, that are floating in the air. This process is affected by the air pressure and temperature in its surroundings.

Clouds are categorized into several types based on their condensation processes; condensation is a process where water particles turn into other forms. Water particles can turn into different forms: dust, sea salt, sulfur dioxide, and other microscopic objects with hygroscopic properties and a size of 0,001-10 micrometers.

Each type of cloud has its own characteristics which are determined by two things: the capacity of the water it can transport and its temperature.

The Different Type of Clouds

The clouds are called Cirrocumulus because it’s a combination of Cirrus and Cumulus clouds. The shape of the Cirrocumulus clouds continues to change over time. They look like multiple fibers piled on top of each other. They can also look like a bunch of water waves made of ice crystals, so even just a drop will feel cold.

Stratocumulus clouds are a combination of Cumulus and Stratus clouds. They look like a bunch of cumulus clouds that unite. They then spread out to form layers like stacked blankets. The appearance of these clouds doesn’t indicate rain.

Nimbus clouds are a combination of Stratus, Cumulus, and Cirrus clouds. They usually bring rain. They’re dark gray in color and thick and evenly shaped. They can cover the ​​sunlight and create a cloudy atmosphere.

Cumulonimbus clouds are quite large and usually towering high like a tree. Their color can range from white to dark gray. These clouds carry quite a lot of crystal loads, so their appearance is a sign of heavy rain.

Altocumulus clouds are unique because they look like snowballs that spread across the sky. However, they can have funny shapes. Even so, the clouds are a sign of a thunderstorm, so people often watch out for its appearance.

Altostratus clouds look like a thin sheet and sometimes form a unique white to gray stripe. They can still be penetrated by sunlight. However, the appearance of these clouds also indicates that light rain will fall.

Also read: Getting to Know Volcanoes and Volcanism: Definition, Signs, and Forms

The Man Who Discovered the Clouds

A British scientist and chemist named Luke Howard Jr. was the man who discovered the clouds and classified them into several types. He recorded his concept of cloud classification in a memoir called Essay on the Modification of Clouds. Initially, he divided clouds into only three categories: Cumulus Stratus, and Cirrus. However, he also named the transition clouds, such as cirrostratus and cirrocumulus.

Although Howard was actually a chemist, his love for the sky made him an amateur meteorologist. His interest also made a huge impact on his study of clouds. People hadn’t thought that, as the inventor of the clouds, he made such a big impact on the world although he was still in elementary school.

At that time, Howard often looked at the sky without paying attention to school lessons, his daydream made him a big influence on the world of meteorology. In 1802, Howard finally managed to extend his cloud classification: three cloud types and their combinations. These three cloud forms are named Cumulus, Stratus, and Cirrus as mentioned above.

The Characteristics of the Clouds 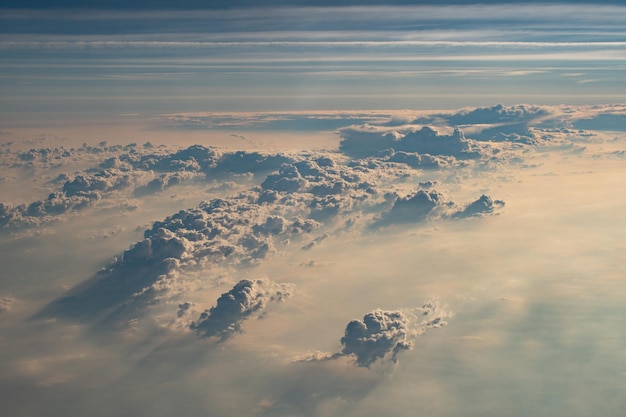 Cumulus clouds are composed of water droplets, while the ice crystals are usually covered at the beginning. Because their temperature reaches 0 degrees Celsius, these clouds often bring rain.

After discussing the different types of clouds, let’s take a look at a brief summary of their characteristics, including the altitudes usually occupied by each cloud type.

Low clouds are located at an altitude of 2.000 meters and are divided into three categories: Stratocumulus, Cumulonimbus, and Stratus.

Medium clouds are located at an altitude of 2.000 to 6.000 meters and are divided into two categories: Altocumulus and Altostratus.

High clouds are located at an altitude of more than 6.000 meters and are divided into three categories: Cirrus, Cirrocumulus, and Cirrostratus clouds.

The clouds exist because of the rising air and being at an altitude of 500-1.500 meters. There are two categories: Cumulus and Nimbostratus.

We’re at the end of our discussion on different type of clouds, their characteristics, and even their inventor. Are you interested in learning more about the type of clouds scientifically through the latest technology and learning methods? At Sampoerna Academy, students’ learning experience is supported by the STEAM learning method and the integration of technology.